It is the first stage in a campaign to get the government to meet the housing crisis head on.

The petition can be signed by individuals and organisations.

Please send the link out widely and share on social media. We will begin a second push in late January once the festive season is behind us but we are keen to get it out and around before then.

Get Active with Alternative Aotearoa 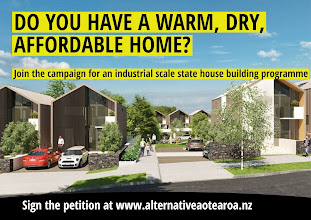 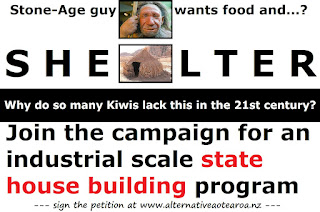 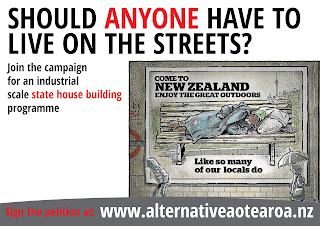 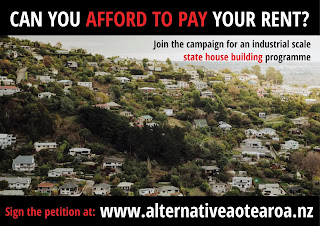 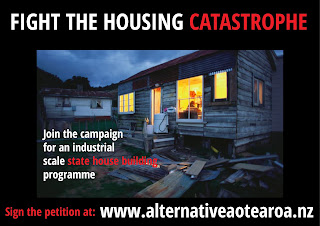 Posted by Christchurch Progressive Network at 18:45

The video of the full nine hours of the Alternative Aotearoa seminar is below. 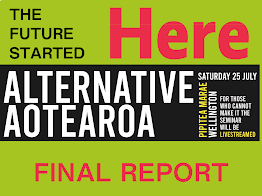 Over the next couple of weeks transcripts of all the seasons will be made available as will videos  broken down into session segments.

The full list of sessions and speakers is here.

If you want to join us in  building a better, people centred Aotearoa, join our contact list by emailing us

Full Video and text (by presenter and session)

Posted by Christchurch Progressive Network at 08:21

A defining moment in the

This Saturday, 25 July at Pipitea Marae in Wellington.

Representatives of a wide range of health, social justice an 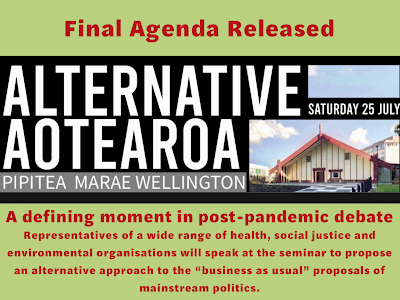 d environmental organisations will speak at the seminar to propose an alternative approach to the “business as usual” proposals of mainstream politics.

We are delighted to have two marvellous New Zealanders, Justice Advocate Julia Whaipooti and 2020 New Zealander of the Year and President of Equity New Zealand Jennifer Te Atamira Ward-Lealand, to Co-chair the day.

Keynote speakers who will set the kaupapa for the day are the Director of Action Station Laura O'Connell Rapira and Pasifika community activist and Auckland City Councillor Efeso Collins.

Wellington City Councillor Tamatha Paul and University of Auckland Law Professor Jane Kelsey will record and collate the presentations into a final report which will be available to the media and will be presented in person to each of the main political parties.

We are thrilled with the calibre and integrity of the organisations and presenters throughout the various panels. These groups and individuals are the change-agents New Zealand so desperately needs at this critical time.

The full final agenda is pasted at the end of this media advisory. Pasted here also are more details for each of the speakers.

The best opportunity for media to speak with the co-chairs and keynote speakers will be at the lunch break at 12 noon which will be set up as a media conference.

The event will be livestreamed in several places including thedailyblog.co.nz

The video and transcribed presentations will be found asap after the seminar at chchpn.blogspot.com

Mike Treen – National Director of Unite Union. Mike has been a campaigner against war and for economic and social justice since he was a high school student

Amanda Larsson – Amanda Larsson is a Swedish-born, Tāmaki Makaurau-based Climate and Energy Campaigner, who has been leading Greenpeace New Zealand's policy work on the Covid-19 recovery

Dr Mike Joy – Senior Researcher at Wellingtons Victoria University’s Institute for Governance and Policy Studies and a founder member the Better Futures Forum. He is a freshwater ecologist, environmental scientist and activist

Cally O’Neill – Participatory designer for sustainable architecture and social and environmental activism, with a focus on promoting participatory design in climate policy and political process transformation.

Kevin Hague – Kevin is the Chief Executive of Forest & Bird and a member of the Mental Health and Wellbeing Commission, and was previously a Member of Parliament, public servant and community activist

Aaron Packard – Aaron Packard is the chairperson of 350 Aotearoa, and has spent the last 10 years working on global campaigns and projects for 350.org, from blockading coal ports to supporting climate activists to organise safely under repressive regimes

Dani Pickering – Community organiser for People Against Prisons Aotearoa and the #ArmsDownNZ campaign, and a PhD candidate at Victoria University of Wellington. Their research covers political activation and the growth of social movements.

Michael Sharp – A lawyer who has been involved in a number of cases challenging government housing policy, helped to found a housing advocacy service based in Tauranga and is a spokesperson for the State Housing Action Network

Anjum Rahman – Project Lead of the Inclusive Aotearoa Collective Tāhono, a project developing a Strategy for Belonging and Inclusion for Aotearoa and seeking to implement it by bringing diverse communities together to work on shared goals

Tania Pouwhare – Tania (Ngāi Tūhoe) is a social intrapreneur at Auckland Council’s social innovation team where she leads the strategic thinking on livelihoods, wealth and economic power in the context of south and west Auckland


Posted by Christchurch Progressive Network at 14:55

Now is the time